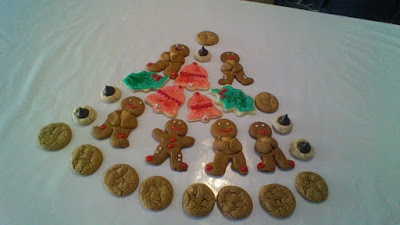 I'm still doing Christmas baking. Yesterday, I made gingerbread boys. I got an idea just from a photo in a cookie recipe book I saw at the grocery store checkout but didn't buy. I put Teddy Graham crackers on some of the gingerbread boys and folded the arms over them, so that it looked like the boys were holding teddy bears. Today, I baked sugar cut-out cookies, holly leaves and bells. Mom and I decorated them together with some red and green royal icing. The holly leaves have red hot candies for holly berries, and the bells have silver nonpareils for clappers and decorative stripes of red hot candies.

I'm watching "Meet Me in St. Louis" and waiting for my brother and family to arrive. Merry Christmas, my friends. 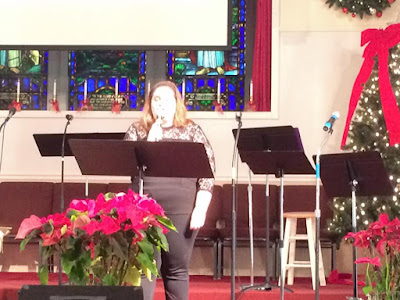 It was a little different to begin this year's Christmas with a church service as it fell on a Sunday. I sang a solo, "Beautiful Star of Bethlehem." With all of the busyness of the season, I didn't practice it nearly as much I had hoped to do, but it turned out well and I wasn't overwhelmed with performance nerves. I enjoyed having practically the whole family with me this year for Christmas. Even my niece who was not able to travel to be with us this year talked to us and watched the present opening by Skype or Facetime. One of the funnier moments of the day happened when I tried on a new winter coat, my big gift from Mom and Dad this year. I should explain, for those who may not know, that I am the baby of the family and my three older brothers are eight, ten and twelve years older. I was sitting between brothers Tim and Bruce as I opened my gift. As I was trying on my coat, I began to struggle with the zipper which was asymmetrically offset to the left. Tim, on my left, began helping me with my zipper. Then I was puzzled by the coat's belt. The buckle had a piece to poke through a hole, but the belt itself had no holes. Bruce began arranging my belt the way he supposed it should go. The ridiculousness of the situation started to get to me, and I started laughing and said, "I need my brothers to dress me." Bruce then pats me on the head and says, "And we can pat you on the head and say that you are all ready for school."

Here is a funny conversation in our house this morning. We had seven family guests stay overnight. I came down this morning to find my two nephews, Bill, 29, and Joshua, 23, on airbeds in the living room. My brother Bruce, Bill's dad, was sitting nearby. I said, "Oh, is this a slumber party?" Bill says, "Yes, it's for the cool kids." Bruce tells me, "You weren't invited," and then, "You notice that I'm here." Some time after this came the admission that it was more like the nerdy kids. My brother Dan comes down, and he, Bruce and Bill begin talking about various sci-fi and space movies. Eventually, Bruce and Bill begin to mention a movie Dan has never seen and doesn't know. Bruce says to Dan, "You're not nerdy enough for us. Go over there by the cool kids." Dan says, in mock sadness, "I've been rejected by the nerds!"

I thought I found the perfect Christmas gift for my aging techie Dad this year: a T-shirt that says, "iTired, There's a nap for that." He's wearing it today. I just looked over at him and saw him stretched out on the loveseat, obeying the instruction on his shirt, and told him he was wearing the right shirt for the day. Brother Dan was also wearing the right shirt today. It says, "Coffee, the most important meal of the day." He came down to breakfast as the family was in a big discussion on Keurig coffee makers and K-cups. This was the Christmas of the K-cups. Mom and Dad just got themselves a new Keurig machine, and several (maybe all?) of us kids gave them various K-cups to use in it. It wasn't all coffee. Some of them were for cocoa or tea. We didn't have any repeat flavors or brands either. Our Korean honorary sister Jeannie gave them some Korean red ginseng tea, which is, apparently, good for their health and longevity. 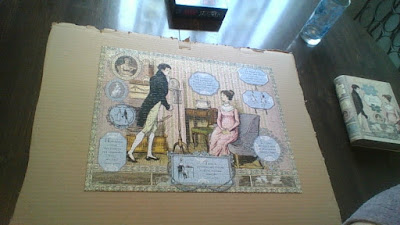 Brother Dan and family will be staying with us until Friday. This photo is the result of last night's activity, putting together a jigsaw puzzle my friend Debra gave me for Christmas last year. It's a collage related to Jane Austen literature with quotes from various books. My brother Tim (well, nephew Matthew) gave me a new jigsaw puzzle this year. That one has twice as many pieces and is a photomosaic of Van Gogh's "Starry Night." I thought I should warm up with this one. Dad and nephews Joshua and Micah had fun puzzling with me last night. We stayed up pretty late and got chatting too. 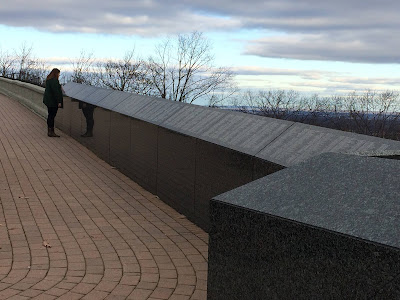 My brother Dan posted the photo of me above on December 28th. I didn't post any words then, but I will now. This photo was taken at the 9/11 Memorial at Eagle Rock Reservation, West Orange, New Jersey. You can not see it from this perspective, but you can see the New York City skyline from this point. I was reading the names of victims, many of whom were New Jerseyans, on the monument.

Another funny moment in our family. At dinner, we were discussing Gary Chapman's five love languages, which are, in no particular order, quality time, words of affirmation, physical touch, acts of service and giving. The family wondered what my love language was, and mom thought it might be physical touch. I was sitting between brother Dan and sister-in-law Dorothy who both immediately began to stroke and pet my back with both hands.Nephew Micah reached across the table and began to brush my arm with his fingertips. I said, "I feel so loved," and then, "I also feel like a golden retriever."

(Okay, so this is technically not a December post, but it deals with a December event.)

I had an eventful weekend. This Saturday, I had the privilege of attending the wedding of two friends, Kathy and Steve, who had their first date twenty years ago! I enjoyed the ceremony at a little church where the former chaplain of our singles' group is the director of youth ministries. The reception, held at the church, was a combined winter wonderland and New Year's theme. I enjoyed seeing old friends I hadn't seen in a while and meeting some new ones, including the nine-year-old piano player from the ceremony who enjoys reading and writing stories. Afterwards, I met up with friends at the home of Todd and Jo Anne for a New Year's Eve party. I'm so happy and blessed to have a number of good friends.