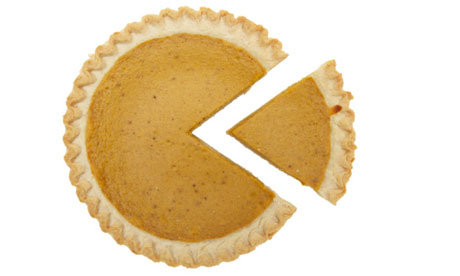 I was in a happy mood this morning, cooking eggs while dancing around the kitchen to music I was only hearing mentally. There was a noisy little cricket chirping away at our tea and coffee station. I couldn't quite locate him, but after Mom and Dad were up, I joked that he sounded very close and I almost wondered if he was having a spa bath in my coffee cup, although I can't imagine he'd be so comfortable to keep singing in so hot a bath.

I listened to some YouTube music recommendations this morning, in an album of retro easy listening from the '60s. Two notable discoveries were “A Swingin' Safari” by Bert Kaempfert and “Murder She Says” by Ron Goodwin, a theme song for an earlier Agatha Christie Miss Marple show than the one I've been catching on Netflix. I say that these were discoveries, even though they're old, because they're new to me. The second piece has more of a danceable beat than I would, at first, associate with Miss Marple, but it's classy and even has some old-timey harpsichord sound in it.

I arranged to meet my friend Lisa today to go to lunch and on a drive with her to an address in Secaucus as a practice run for a drive she needs to make on Thursday. She spoke rather then typed her text message into her phone, and Autocorrect made Secaucus into “C Caucus.”

This morning, I asked Dad to set up the Kindle for PC app on my laptop, so that I could review my ebook file for Action Men and the Great Zarelda. Dad, our resident “geek squad,” was dividing his attention between helping Mom with her computer and helping me with mine. 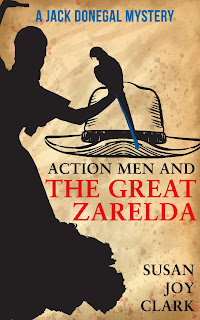 So, I made myself pretty for my lunch date with Lisa in the mean time, even polishing my nails with an OPI color called Princesses Rule, a pale pink iridescent polish. Working at home, I ordinarily don't fuss too much with my appearance. My friend Gretchen says that every day is a party and that you must dress for it, and this seems like a nice and perky outlook. Putting polish on encouraged me to accessorize a little with a charm bracelet featuring charms in the form of a purse, high heeled shoe, perfume bottle, hanger and other girly fashion items.

Dad was successful in installing Kindle for PC on my laptop computer, and I had to return the favor. Dad wears compression stockings now after getting some treatment for a venous ulcer on his ankle which has now healed. It's been my job now to help put them on him, and it is quite an exercise as they are so tight and require a bit of tugging to get them on right. Dad told me I now had to “install” his stockings … “and configure them.”

I met Lisa at her house at noon, got in her car and she drove to the address in Secaucus. I learned that she has a new job as a visiting nurse for children with medical issues. Her new assignment, Tristian, lived at the address we were trying to locate. I learned she is a lot like me and doesn't enjoy driving into cities or highway driving. It was a little surprising since I would guess she is the bolder and braver of the two of us. She expressed I would make a good companion for her driving adventure, since I have such a calm personality. Later, she told me that, although she noticed I would sometimes grip the car door, at least, I refrained from making little gasps and other panic noises.

“I'm not going to like this,” Lisa told me, expressing her feelings on her future commute on more than one occasion. “No,” I said. “I wouldn't either.” I hope it will get easier for her. We did locate the apartment community where her little boy lives, and it is a fairly nice one with a central playground, and, apparently, indoor lap pool. “What is the good of that?” said Lisa, on the “indoor” part of that description which she picked up from a kind and helpful doorman.

We stopped at a Smashburger for lunch at Lisa's suggestion, which was ideal since I had a gift card here. Lisa ordered the basic burger and fries and a chocolate shake. I tried the New Jersey burger and Smashfries. The New Jersey burger has bacon, blue cheese, a combination of haystack onions (frizzled onions) and sauteed onions, lettuce and tomato on an onion roll. The Smashfries were flavored with rosemary, garlic and olive oil. Lisa told me she likes basics and doesn't like to “get too crazy” with food. I guess I like to get a little crazy. 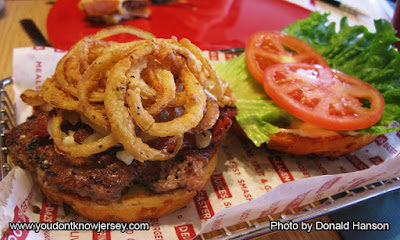 Lisa and I prayed over our meal. I prayed for her new commute and new job assignment and for Tristian, and I thanked God for our friendship and time together. A very polite and friendly Smashburger worker hung by our table with a plate for one of us. “I saw you two praying and took a step back. You don't interrupt praying!” she said.

We smiled and thanked her and gave her some appreciative comments. I have a feeling the woman is a praying woman herself and was happy to see two others of a similar mind.

Lisa and I mostly got caught up on each other's life events. I talked mostly about my ghostwriting project, and Lisa gave me news about her husband who is in the hospital. Several times, Lisa had to remind me to eat, because I was doing more talking than eating.

We did a quick tour of Hobby Lobby after this, and Lisa found some miniature Christmas stockings for her cats and some fall fabric printed with scarecrows and pumpkins to cover her home desk. I didn't do any shopping but was happy to look around and have the company.

Once at home, I was able to review my ebook file for Action Men and theGreat Zarelda and uploaded it to Amazon. As before, I was told it might take 72 hours before it would go live on the Amazon site. I made an announcement it was coming soon on Facebook and got a few reactions from friends and fans, but before the evening was past, I learned it did go live.

I tried opening my file called Paloma's Story, for my ghostwriting project on Paloma Rambana, and it was in read-only format. I struggled, under Dad's instruction, to get it out of that format and into an editable one. I now have back-up files on the flash drive and some files Staples saved from the old hard drive on the laptop, and I'm guessing the latter are more up to date. I really didn't look it over to see if the file was up to date as I was so distracted by trying to change the format. I had to get Dad, the “geek squad,” to look at it, and he struggled too. It seemed to have something to do with the entire folder of files being in that read-only format and it affecting all of the subfolders. Dad was partly distracted by some other computer work, so we didn't get the issue resolved by the end of the day.

At night, again, I heard the cricket in the area of our coffee and tea station and Keurig coffee maker. I moved each box of tea, asking, “Where are you, Cricket?” Dad added to this, saying, “We're coming for you, Cricket!” and immediately the chirping stopped as if the cricket was really intimidated by the sound of Dad's voice. It didn't stop for too long though. A little while later, he was chirping happily again. 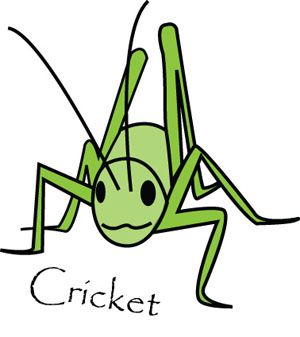 I continued to move things around and when I moved a box filled with our refillable K-cups for the Keurig and held it to my ear, I was pretty certain the cricket was hiding in there. Dad came over, listened to it and agreed with me. “Be nice to him,” I said. Crickets don't seem as creepy to me as some other insects, and I actually like the sounds they make, even if I don't expect to hear them in the house. Dad picked up the whole box and carried it outside. I heard him tell the cricket, “We're giving you your freedom.” He sat on our front steps and removed the K-cups from the box one by one. When the cricket crawled up to the edge of the box, Dad gave him a little flick and said, “Goodbye.”

Later, Mom said that the cricket would probably find his way back to our garage and back into the house. “No,” I said. “He's going to find a girlfriend.” After all, isn't that why he was making so much noise, wooing a mate with his serenade? Somehow, I see a children's story in there somewhere and might come up with one if I thought on it.