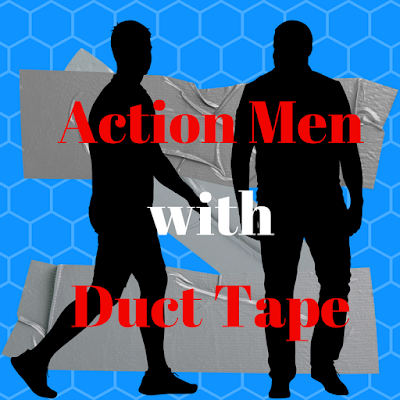 This is a Jack Donegal Mystery, in the same series with Action Men with Silly Putty and Action Men and the Great Zarelda.

“So, what do you think, Uncle Andy?” Bronwyn Byrne, my “niece” only by my close brotherly association with her actual Uncle Jack, stepped out of the dressing room, held her arms out and twirled around.

I sighed, expressing relief. “Ah. It's fine.” I'd seen plenty of “Nos” on this shopping trip – the skintight leggings, the too-short skirts, some darkly themed band T-shirts of questionable taste. The outfit she was wearing with the pink shirt bedecked with cupcakes and sprinkles was something to which I could say “Yes.” This was how little girls should look, all pink with cotton candy and unicorns and glitter.

“It's fine? Just fine?” She drooped her arms down to her sides.

Somehow, the girl had translated “fine” as “barely passable.” “Yeah … right. I mean it's … cute.”

“Nah. Nah. You look your age. You look like a cute ...” I was not good at this. I've never been a dad, and here I was acting in the role of one. I was out of my element, standing here with my arms loaded with pastel-colored shopping bags, not to mention Bronwyn's little purse, covered in emojis, dangling from my elbow … not exactly the manliest of accessories.

That was a very good question. Why couldn't Jack be here to handle these delicate girly issues with his own niece? “He got an important phone call on his cell about the event tomorrow, so he went to look for a quiet place to talk.”

I turned myself around, Bronwyn's little purse swinging like a flag in tribute to my manliness. I spotted a boy, around 12, skulking in a corner behind a clothes rack with his Nintendo DS, probably the unfortunate brother of a shopper in this girly store. “Hey kid,” I said. “Come here.”

He looked up and lifted an eyebrow.

“I need a man's opinion.” This seemed to get his attention. I hoped Bronwyn would appreciate the opinion of a boy her age. She was already starting to notice members of the opposite sex.

When the kid approached, I put my hands on his shoulders and pointed him in Bronwyn's direction. “See there? That's my niece. Her outfit shows good taste, right? It's cool, hip, da bomb … Is da bomb still a phrase?”

“Uh … That would be a no,” said the kid. I noticed he refrained from rolling his eyes at me … unlike Bronwyn.

“Well,” I said. “The outfit. She needs some affirmation. She looks good, right?”

The kid was now giving me a nervous side eye. “Uh … yes?” The boy either had a young person's habit of ending every phrase as a question or he was terrified of disagreeing with me. He shrugged a single shoulder. “Sure. Whatevs. It's cool … for her.” He said this as if he wanted me to be sure he wouldn't wear it himself.

A little while later, I met Bronwyn in her regular clothes, the trial outfit draped over her arm. She spoke to me through her teeth. “Can you get any more embarrassing?”

“Uh … do you really want to know the answer to that question?”

“Probably not.” Her comment was accompanied by another eye roll.

“So, you're not taking it?” I asked, pointing to the pile on her arm.

Moments later, we were hitting the halls of the mall, and I was relieved of half of the baggage. Walking along the halls and the crowd, a thought came to me. Maybe the thought came to me out of boredom from shopping at Girly Outfitters and Forever 13 or maybe my blood sugar was dropping and addled my brain. My nose was picking up aromas of Cinnabon and freshly baked cookies, but, up to this moment, I had refrained from indulging. I decided this was a good time to hone her self defense skills.

I steered Bronwyn away from the main mall traffic. “Hey,” I said. “Check out the mannequins.” I directed her towards a side entryway, sandwiched between Old Navy and another tween girl's paradise. The mannequins in the window display were set up like a step by step dance tutorial. I was beginning to think like Jack, imagining photos from the line-up, left to right, put together into an action flipbook.

Bronwyn stood mesmerized, and then came the sneak attack. I slinked up behind her and seized her around the middle, pinning her arms. “Now, suppose I'm a bad guy,” I said, “what do you do now?” We'd gone through this exercise a few times back at our apartment. This was the first time I'd attempted it in public. Looking to my left and spying a mall cop giving me the stare down, I surmised it was probably my last time doing this in public.

Mr. Mall Cop Guy was glaring at me as if I were Ted Bundy. “I'm her uncle,” I said, loosening my grip on Bronwyn's waist. Biologically speaking, this wasn't the strict truth, but, emotionally speaking, it was. “I was impersonating a bad guy and – apparently – doing too good a job of it.”

Mr. Mall Cop Guy looked from me to Bronwyn and back again, perhaps looking for a sign that she was okay or that I was telling the truth. I pointed to him. “You, Sir, are doing an excellent job of protecting young girls from creeps like me … well, no, not literally creeps like me … creeps like the bad guy I was impersonating. I, for one, salute you.”

I put out my arm for a fist bump, and he took a couple of steps back.

“Aw, c'mon. I didn't swing at you. If I wanted to swing at you, I'd do a better job than that.” This was my day to stick my foot in my mouth over and over again. I was going to have to head over to Starbucks for one of those frappuccino things to wash out the taste of foot. “Not that I'm in the habit of taking a swing at fine upstanding security personnel.”

Bronwyn reached over and gave me a squeeze around the middle. “Uncle Andy is completely harmless,” she told Mr. Mall Cop Guy.

“I am not completely harmless ...” Just like Bronwyn had understood “cute” as babyish, I understood “harmless” as milquetoast. Then, I looked at Mr. Mall Cop Guy and thought I'd better change my phraseology. “Except to kids. I'm harmless to kids.” I gave Bronwyn a firm pat between the shoulder blades and rubbed my knuckles into her scalp.

Mr. Mall Cop Guy shrugged and shook his head in a way that made me think he was still assured that I was a weirdo but just of the “harmless” variety.

Posted by Susan Joy Clark at 6:27 PM No comments: