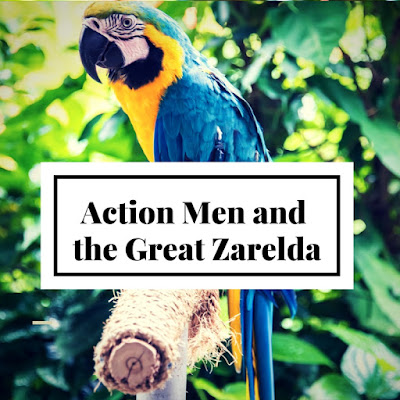 “An animal smuggler? It's painfully obvious? How?”

Jack looked at me. “Clue number one, the big costume skirt that didn't seem practical for travel. Clue number two, the warm pulsating something against your leg. Clue number three, this blue feather.”

“So what? She had birds nesting in her skirt? Wouldn't they be noisy and fluttering and, you know, tweeting?”

“Not necessarily. Animals smuggled in planes are generally sedated.”

“That's quite some theory you have.”

“Andrew, you weren't taking leave of your senses. I would bet a steakhouse dinner that what you felt against your leg was an Amazonian blue and yellow macaw parrot.”

Janie came just then with our lunches, and I wondered how much of our conversation she had heard. She set my psychedelic burger in front of me. “I had a cobalt blue tarantula crawl on my leg once … in one of those hands-on museums,” she said.

“You weren't freaked out?”I asked her.

“Of course not. He was quite a cutie actually.”

I nodded at her with what I'm sure were wide eyes. I was intrigued by this bit of random information and might have pursued it more if I weren't so concerned about Jack's theory and Amazonian parrots.

Janie set the Jackson Pollock coffee in front of Jack. The mug had a layer of cappuccino foam at the top which was embellished with swirling streusels of syrups in brown, caramel, white and red. The saucer too was splashed with varying colors of syrup.

Janie beamed at him, her dimples deeply showing.

When she walked away from our table, Jack looked to me, bobbing his head slightly in the direction in which she had gone. “What about Janie?”

“Well, when one door closes, a window might still be open …”

“Can you stop talking in code?”

“May be a criminal … innocent until proven guilty.”

“May be a criminal … there's a woman right here who finds you intriguing and, most likely, for better reasons …”

Some time back, in spite of our ongoing competition in insults, Janie had made it perfectly clear that she, as the British might say, “fancied” me. I was both amazed and flattered. I watched her across the room as she helped customers at another table. Her wit and style and dimpled smile were rather appealing, but Janie Duveau didn't make castanets dance in my chest. Janie Duveau made me feel comfortable.

I looked to Jack and, not sure how to answer him, I stuffed my face with technicolor burger.

“This wouldn't be the first time you've fallen for a woman with criminal ties,” said Jack. Jack reminded me of Angela, the cute cowgirl I met at the Boot and Scoot, who turned out to be the wife of the man who later held me at gunpoint and attempted to kidnap me.

I didn't know whether to laugh or bang my head into the wall in frustrated acknowledgment that this was very nearly the truth. Then I remembered that Jack Donegal wasn't exactly Mr. Chick Magnet himself. “We've gotten off topic.”

I looked down at the feather. “A blue Amazonian whatever sort of parrot you claim this to be from is incredibly specific. How could you possibly know this without watching way too much of the Animal Planet?”

Jack took his iPhone and, in moments, brought up images of the blue and yellow macaw. He held the feather beside the photos, and the blues did seem to be the exact same shade and hue.

“It's a good match,” I said. “Still, feathers can be dyed. You haven't disproven that it's a feather from her garter.” I bit into my rainbow burger, Kool-Aid pickles and all.

“And neither do you have an alternative explanation of the warm, pulsating thing on your leg.”

I have to admit that I preferred to believe that I wasn't mad. “So, she's a criminal … maybe. She still doesn't seem like the most evil of criminals.” I stabbed a bit of runaway blue pickle with my fork and examined it. “She likes animals. Who else would bother to smuggle an animal across borders but someone who likes animals?”

Jack rubbed his fingers together in the universal gesture for money. “Andy, I think you ought to take up this challenge of being her magician's assistant. You could do a little undercover investigation.”

“What do you expect me to do? Frisk her and search her skirts for hidden pockets full of parrots?” I suddenly found myself blushing profusely at the thought of frisking this bombshell of a woman. “Actually, I think that might kill me.”

A day later, my costume arrived. I was to meet Zarelda later that evening for a rehearsal. I stood looking at myself in the round living room mirror after I tried it on for size. I felt absurd in a pearlized white tuxedo and top hat, silver sequin vest, silver lamé cummerbund and shiny iridescent dress shoes. The only way I imagined I could be gaudier was to edge my tie with blinking lights. “I think the Osmonds are missing a brother,” I told Jack. “Do the Osmonds have a red-headed brother?” I paused. “If the Osmonds aren't missing a brother, maybe the Jacksons are … and, yes, I do know that's even more of a stretch.”