When my friends and I entered the building, however; what we noticed first was The Shops at Columbus Circle, as we walked past several storefronts. Our Big Band performance was in the Rose Theater in the building. We took an elevator to the sixth floor where we had a private box. This was my first time -- in my memory -- having a box seat. Stephan called them "cheap seats," and I suppose they were comparatively, $38 per ticket, but I did not at all mind this perspective. Our box was directly above the stage, and, I think, I probably noticed things from this bird's eye view that I would not have seen even in a front row seat. It was also a comfortable spot for a migraineur. I suffered no discomfort from either the volume of the music or any lighting effects. White lights in snowflake shapes were projected onto the boxes above the band, and this was a pleasant, festive touch. I later told my friends that, as much as I enjoy the music of Trans-Siberian Orchestra, it probably would not suit my migraine brain to attend one of their live concerts with all of their dizzying colored light effects. (Migraine aura gives me enough of a disco light effect without any outside help.)

The photo below is not mine and doesn't show quite the perspective I had from where we were seated but should give you some idea.

Wynton Marsalis, the band leader, was the only band member previously familiar to me, mostly for his classical trumpet recordings. I heard his voice making the introduction to the performance, and, at first, I did not spot him and thought he was off to the side of the stage where I could not see him. No, he was tucked away in the third row next to the drummer and with the rest of the trumpet section. When I heard his trumpet solo in "Jingle Bells", their opening song, I spotted him and heard the beautiful, sonorous sound he made with his instrument.

It was interesting to me to see what mutual respect the band members had for one another. As different members had their improv solos, I would notice the body language and movements of the other members, noting their appreciative smiles, head bobbles, foot tapping and swaying.

Some of the thoughts that flitted through my mind during this performance may seem a little strange. The last previous live band performance I've seen is, most likely, that of a high school band. What a difference it makes when each of the band members are playing on this level of expertise and professionalism. I almost forgot that it is perfectly appropriate to applaud after instrumental solos in a jazz concert. (I suppose it has been a while since I've been to a live jazz performance.) I do know this is the expected etiquette, but I suppose I am thinking of classical concerts and other formal occasions, even some graduation ceremonies, where you are expected to hold your applause until the end. There were even some "woops" of appreciation from the audience members occasionally, and, once or twice, my little introverted self was among the "woopers."

At one point, Doug, a friend in our party, leans over and says, "It's amazing how they can make these horns 'talk.'" I thought that was an interesting observation of his.

I also enjoyed the vocals of Denzal Sinclaire on songs such as "Caroling, Caroling" and "The Christmas Song (Chestnuts Roasting on an Open Fire.)" He looks like a bit of a hipster dude, doesn't he? (This was not his attire on the night of the concert.) "Smooth" is the first adjective that suggests itself for describing his voice. I want to compare him, and yet I don't want to compare him to Nat King Cole. I'm such a believer in individualism that it seems to detract from his individuality to make this comparison. I would not call him a carbon copy of anyone, but it is probably safe to say that Nat King Cole is likely one of his musical influences, and seeing, later on the Internet, that he has performed concerts of the Nat King Cole Songbook, seems to clinch this suspicion. Probably, he would find my comparison more complimentary than otherwise. At one point, while he was singing, my friend, Elizabeth, whispers to me, "He sounds like someone. Who does he sound like?" I whispered back, "Nat King Cole." She quickly agreed with me,  letting me know this was the thought she had in her mind too.

At the finale of "Caroling, Caroling", he did a little fancy scat singing and including the line, "If I were a bell, I'd go ding, dong, ding dong ding." The tune and lyric reference to "Guys and Dolls" almost felt like a private joke among music appreciators. I once saw a T-shirt on zazzle.com that said, "Yes, I know all the lyrics to every musical, so sue me, sue me, shoot bullets through me," the latter part of which, for those who might not be so familiar with the play, is also a "Guys and Dolls" reference.

Another song that stands out to me was the band's rendition of "Winter Wonderland", starring a different vocalist, Audrey Shakir. The photo below is not mine again (if the gettyimages watermark was not enough of a clue to this fact), but this is the exact sparkly blue gown she wore in the performance I saw. I love her expression here. 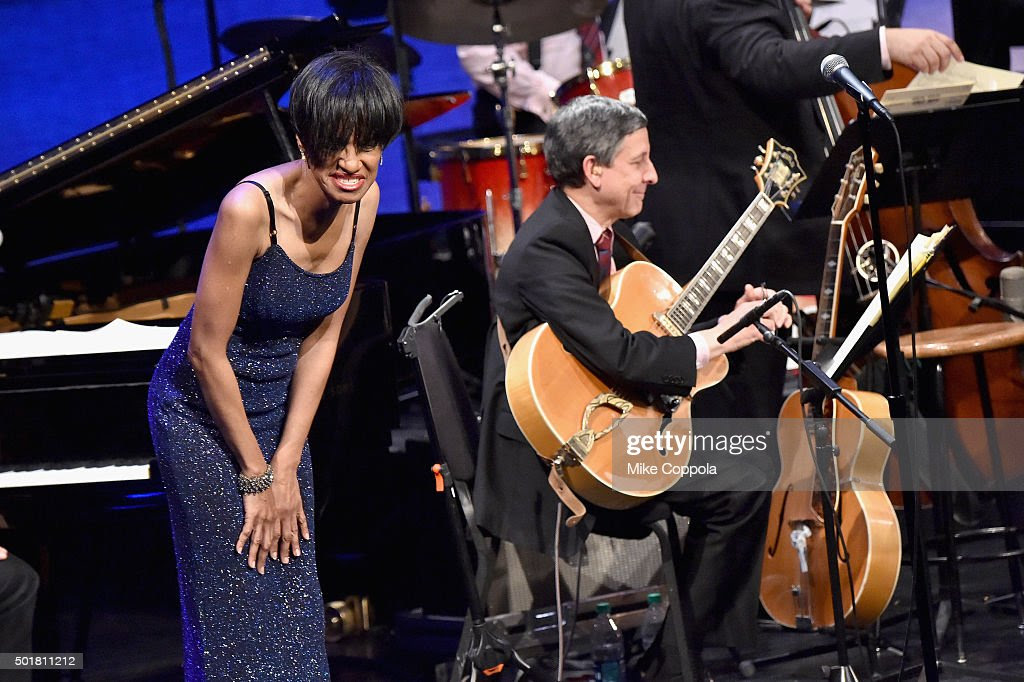 This was an interesting piece visually as well as auditorily. In the introduction to the piece, I noticed the front row saxophone section set aside their saxophones for a flute, bassoon and clarinets. Trumpets and trombones used mutes during this part also. There were switches back and forth from woodwinds to saxophone and from muted to unmuted as the musical mood fluctuated. Shakir also did some fun scat singing.

The closing piece, "Silent Night," might stand out as a favorite for me. It had a bit of a swing to it, and as I did a bit of a head and upper body waggle, Elizabeth turned to me and said with surprise, "I didn't think you had it in you." It had a swing to it and yet was mellow enough to fit with "a silent night." Yet, it was by no means a lullaby.

To read about my preshow dining experience, read A Delicious Thing Happened on the Way to Lincoln Center