My Dad, My Hero, My Helper 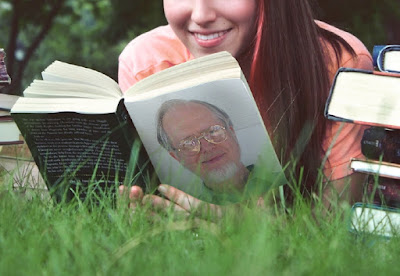 My father's a unique man. Father's Day cards are often centered on certain themes: sports, golf, fishing, hunting ... None of these themes seem to suit my father. My father seems nonchalant about sports. He'd rather watch Discovery Channel than watch a football game. He is full of fishing stories from his youth, but this is not a hobby he's pursued in recent years. I found a perfect Father's Day card for Dad several years ago. The overall print of the card was like a green circuit board. How suitable for my father, the retired electrical engineer.

I had a vague notion -- albeit very vague -- of circuit boards early on in life. Back in the '70s, a long time before personal computers became so common, Dad built his first computer from a kit. I remember trying to help him by putting the keys in the keyboard, only I was putting them in alphabetical order.

Dad earned 44 patents over his career at ITT. What exactly did he invent? Well, I could tell you, but then I'd have to kill you. 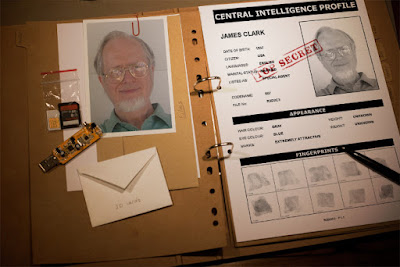 I jest, but actually that is not too far from the truth. Many of the projects Dad worked on he could not even tell his own family. I do know that he worked on a secure phone used by Ronald Reagan. Here is how Dad sums up his career in one of his online bios.

I worked for ITT for 43 years before retiring, getting about as many patents. Highlights would include designing one of the first computers specializing in voice processing, and designing the navigation computer system used in the GPS satellites. In addition to designing computer and communications hardware, I've written lots of software, including tools for hardware and software design.


Dad may not be a sports enthusiast, but he does have his hobbies. He lists his hobbies on one site as "recreational math." I never found math to be recreational, have you? I'm not entirely sure what that means, but he does sudoku puzzles, so I suppose they might be considered as recreational math. He also began selling these math art T-shirts on Zazzle. Here's an example, the crystal goblet T-shirt. 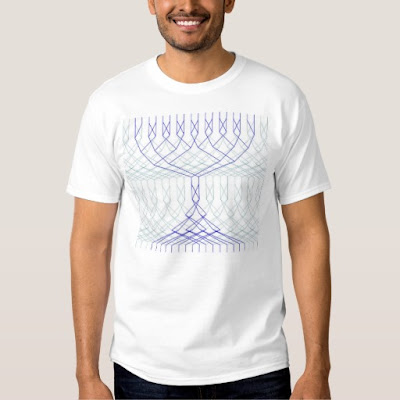 I'll let him describe it in his own words.


This design began as two data-flow diagrams to show the dispersal of data by a random permutation device (an application of U.S. patent 5,734,721). One diagram looked like the top of a goblet, and the other like the bottom, so the two diagrams were joined. Both parts show the same data-flow network (flow is downward). The bottom part traces where two data bits can go (starting at the top of the stem of the goblet), and the top part traces where two data bits can come from.

If you happen to share Dad's enthusiasm for math or know someone else who does, you can order this and other math design shirts at www.zazzle.com/mathart.

Dad also has his own art hobby ... origami. He has even created and published a few of his own origami designs, like the origami waterlily design below. 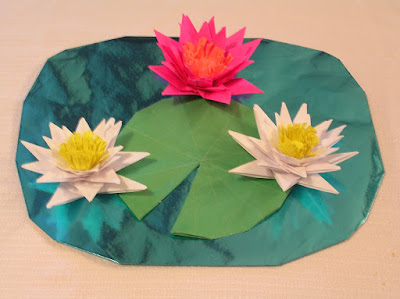 If you would like to create your own origami waterlilies, he has blogged his own origami tutorial for the waterlily design here.

Perhaps, this is beginning to sound more like a portfolio than a personal tribute, but I look up to my father, and growing up, I felt like my father could do anything.


Today, that opinion hasn't changed much, which is why I don't hesitate to ask him to help me in my hare-brained schemes.

A couple of years ago, I put on an Oktoberfest puppet show at my home church with the help of the puppetry team I lead. 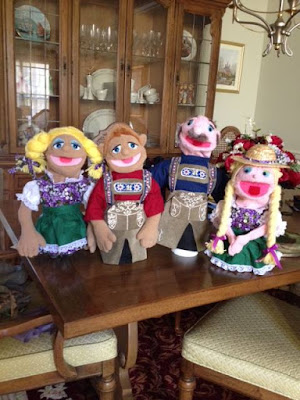 I can't take credit for the beautiful liederhosen and dirndl costumes. Betty, my right hand woman, did that. One of the songs we used in our performance is this completely insane song, "The Chicken Yodel."

As I was listening to the music, my insane imagination came up with the idea that a chicken puppet would be on the top standing tier of my stage laying eggs, actually ping pong balls, which would fall down to the bottom kneeling tier where a little girl puppet, one of the cuties pictured, would try and catch them in her frying pan. I talked to Dad about this and wondered how to accomplish this ping pong ball craziness, and he came up with his design, a henhouse prop that would perch on the top tier of the stage and dispense the ping pong balls when the chicken roosted and hit a lever. 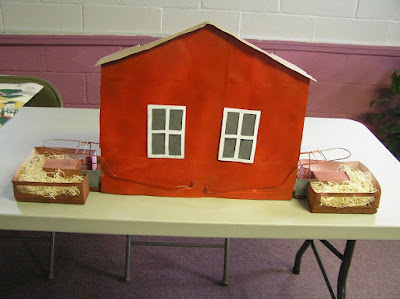 Above each nest is a wire trigger to release,, on each depression, an egg from the storage bin to a hole through the nest so that it looks like the chicken is laying an egg that drops out the bottom of the nest. 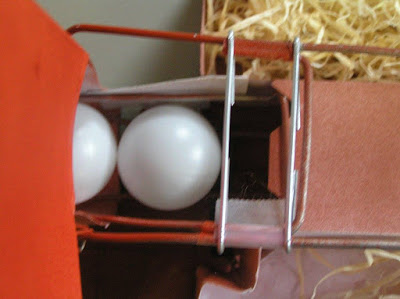 The gate mechanism lets one egg roll toward the hole, while stopping the next egg from advancing.

I had something simpler in mind, but Dad had come up with a rather complex contraption. He kept testing it, tweaking it and perfecting it. Dad spent hours and hours on this prop, and in the end, it was very successful, with children sitting front row during showtime, laughing and excited over the escapee ping pong balls rolling their way.

This is the origami folding, puppet prop making, sudoku puzzling dad I adore. It would take many more pages to express just how much he means to me.

To read about one of my favorite childhood memories with Dad, click here.