The Disco Lights in My Head: Migraine and Music Therapy 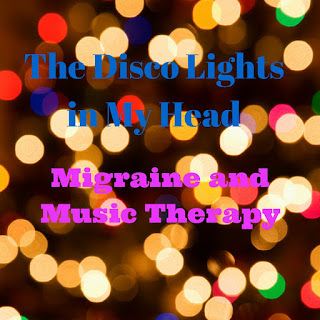 This psychedelic header did not come out as clearly as I had hoped, but if it seems a little straining on the eye, it is perhaps more illustrative of what it is meant to represent -- migraine visual aura. This was the first clue of my illness back in high school, migraine visual aura. It would not be until many years later that I actually learned the term for it. I was getting strange headaches where I would see flickering lights. Sometimes, the illusion of flickering flights, becomes even wilder, and becomes more like viewing the world through a kaleidoscope or disco lights only I can see.

Years ago, before my own diagnosis, when I heard the word "migraine," I understood it to simply be a bad headache. Now, I understand that migraine is a much more complicated illness and is more than just a headache. It's considered a neurological disease. It can have all sorts of variations, some of which mimic a stroke really well. A hemiplegeic migraine causes temporary partial paralysis. It's also possible to have a migraine attack that involves other symptoms but no headache at all, known as a "silent migraine." Migraine is thought to be related to epilepsy with similar triggers.

So, I was fascinated when I read an article about a scene in one of the "Twilight" movies triggering epileptic seizures in different movie theaters due to a flashing strobe light effect. Migraineurs can be photo-sensitive too, so I found that somewhat relatable. This is why as much as I enjoy Trans-Siberian Orchestra, I probably wouldn't go to one of their live concerts.

I found the video a little difficult to watch, but if I was actually in that live performance atmosphere, the volume of the music and the intense light effects, I'm sure, would all be conspiring against me, and I would be having one massive migraine attack.

I have discovered, somewhat recently, that, for me, music can also have a therapeutic soothing effect during a migraine attack. I was at work during a migraine, and I put on some headphones and some music, and, instantly, my pain level was cut almost in half. What was the magical piece? Beethoven's "Moonlight Sonata," the first movement. I don't know that this piece will always have that exact effect, but calming music does seem to help. Migraineurs are also noise-sensitive, so, very likely, black death metal (whatever that is) would not have the same effect.


I tried journaling my migraine attack this last time. I have read advice, some coming from pharmaceutical companies , that migraineurs should keep a migraine journal. I hope to show this to my doctor when I see him, and it should be better than saying simply, "I have a migraine." It could be helpful to me too. I don't know if I had, before now, ever logged the progress of an attack. Journaling can help you keep track of when the attacks happen, how they progress and might help you learn the first signs of an attack. You could also learn the different factors that helped aggravate it or improve it. Oddly, mine started in my knee, some odd numb sensations in my left leg. Some time later, I scratched my head and found it painful to touch, with pain shooting through my teeth on the left side. While covering a Board of Education meeting for the newspaper that night, the disco lights began. In the middle of that night, I woke up with a throbbing head, with pains and tingling sensations shooting down through my legs and arms. So, in the middle of the night, in order to get some peace and sleep, I brought up my laptop, went to Youtube and tried some music therapy. This is the first video I tried, a Disney mashup by Youtuber Grant Woolard.

Nice, right? And, if you aren't using it as music to sleep by, the animation is interesting, to see how the different movie melodies are interwoven.

From here, Youtube went off into a long list of pieces by the Piano Guys. And it worked. I went off back to sleep, and the next morning, the headache was not gone but better than it had been in the night. This is the Piano Guys video that was playing when I woke up in the morning. Play all the way until the end when the "cello guy" of the Piano Guys is goofing around. It sounds a bit like a hypnosis video. That is the exact bit that was playing when I was waking, so if I have a sudden compulsion to play a cello at the sound of a beep, I'll know why.

If you're a migraineur, perhaps music therapy would help you. It would not surprise me to learn that music is helpful with other sorts of pain and medical issues as well. Here's an article that suggests Mozart can help epileptics.

How has music been therapeutic in your life?
Posted by Susan Joy Clark at 3:43 PM