Sunday, September 10, was a fun and eventful day for me. The entire weekend, in fact, was a flurry of activity.

I've been attending a new church, Grace Bible Church in North Haledon, New Jersey, for only about three months. I had recently emailed the pastor there that I had puppets and some background in puppetry and might be able to use it in the church. I didn't hear back from him immediately, but I figured the pastor has a lot of other things to think about besides me and my puppets. Three days before Promotion Sunday, September 10th, when the children would be promoted up to new Sunday school classes, I get a call from the Sunday school superintendent, whom I had already befriended. "Would I be able to do a puppet show during the Sunday school hour?" I was so excited at the opportunity that I could not refuse.

She thought I might have some old skits in my repertoire that I could use. It's true that I had files of material -- I write my own -- but it was not entirely true that I had one particular thing that seemed to me ideal for the situation. I asked her about themes, and she said there was none other than Sunday school and studying the Bible. That night was my first night of choir rehearsal at the new church, and there was about a half hour drive there. Somehow, during the drive from home to the church, I had mentally put together my program. It's sometimes difficult to explain my creative process, but I started with some songs I had, and from there, picked a theme, and then recycled some running jokes with some characters I've used in "solo shows," adding in some new material and putting in some ideas I had meant to use in the past but hadn't yet. It was probably the speediest script writing I had ever done. In fact, it was almost memorized mentally before it ended up on paper. Maybe, we creative types need deadlines to kick ourselves into high gear! 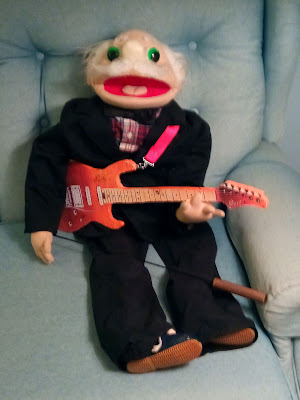 I gave Dad, who has often served as my assistant prop maker, the job of making a guitar for my Professor Votshisname character. I had a guitar song in mind, "Standing on the Promises" from Mark Bradford's Happenin' Hymns album, but the guitar I had was designed for my smaller half body puppets. I thought at first we could get one of those cheap inflatable sort from a party supply store, but I was able to check online and saw that there were none in stock at my local Party City. I could order one, but the rush shipping I'd have to use to get it on time would be much more costly than the one or two dollar item. Still, honestly, when I gave Dad his prop-making task, I was imagining something much simpler than what he did, a foamboard thing that was colorful and whimsical like the inflatable sort that first came to mind. I should know by now that Dad is a perfectionist.

This guitar is foamboard, but the design is from a photo he enlarged and printed over several sheets. There are two foamboard layers which he glued together and cut out the shape with a jigsaw. (We'd always used Xacto knives previously.) Even the guitar strap is more realistic than I imagined with all sorts of wire gizmo fasteners he crafted himself from some coils of wire he had in his shop. It turns out this more realistic guitar strap may also be practical in being easier to put on and remove.

While Dad was busy "guitar building" on Saturday, Mom was busy making a Nutella mocha poke cake for the picnic that would follow the service, and I was busy in a cloud of puppet preparations.

I did get some last minute performance nerves! Even having as much experience under my belt as I do, I still get performance nerves. These were mostly related to my efforts to memorize my 20 minute or so spiel. I found my Sunday school superintendent friend, Isabel, in the foyer who hugged me and prayed for me.

Every so often, I come across YouTube video clips of America's Got Talent contestants who have some serious performance nerves. When I read the comments on the video, I find there are quite a few people with very little understanding of it. The assumption seems to be that a talented person who is aware of his talent would not have stage fright, and that if the person does express any stage nerves, they must be faking it or the whole scenario is staged for the drama of the show. First of all, as counter-intuitive as it may seem, a lot of introverts and shy people are artistic in nature and attracted to performance arts, myself included. Secondly, these same people hold themselves to high standards of excellence. Thirdly, a contest on the scale of America's Got Talent is different than a performance for one's friends and fans, and you can never tell how stiff the competition might be. Anyway, in my case, prayers helped me.

Professor Votshisname and I talked about our favorite Bible characters and verses. Then, he asked for his guitar, and a lady named Jane brought it to him, helping me to fasten it on him -- one arm was occupied! -- chatting to him all the while. After complaining about the arthritis in his hand and the arthritis in his knees, the professor was able to perform an energetic rendition of "Standing on the Promises" before having a fit of narcolepsy and promptly falling asleep. Again, Jane came to my assistance and took Professor Votshisname out of sight for his "nap." 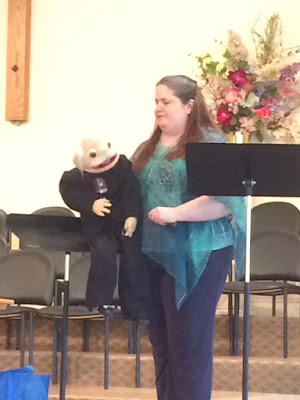 By the way, I do not use proper ventriloquism techniques, but I've been told sometimes that I've fooled people that I do. Jim Henson was no ventriloquist either. I read his biography a few years ago. He said something along this line, perhaps not verbatim, "When the frog is speaking, nobody is paying any attention to me."

After the professor went down for his nap, I brought out my Bird and Flora characters and did a lesson on worrying and Matthew 6:28 - 34 with some humor worked into the script. 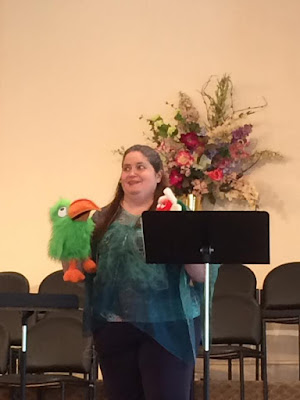 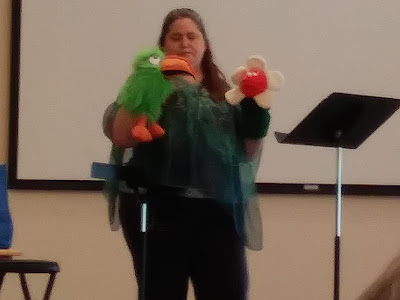 Bird has an identity crisis and doesn't know what kind of bird he is, but he likes to go down to the New Jersey shore and pretend he's a seagull. Although he seemed like an uncooperative object lesson, he became an example of how God provides for "the birds of the air" who "neither sow nor reap nor gather into barns," ... sometimes with French fries and bits of corn dog.

I asked Flora, "Do you ever have to worry about clothes?"

I answered, "Well, that's good, because someone gave me an ugly Christmas sweater one year, and someone said it would grow on me ... but it didn't."

After the service, we had more fun. (I don't mean to suggest that the service itself wasn't also pleasant.) We had a picnic there at the church right afterwards with all sorts of activity throughout the afternoon. A bouncy house and carnival games were set up on the church lawn, and we also had machines for popcorn and frozen custard. 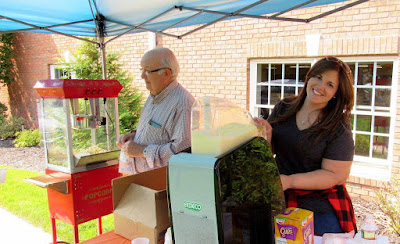 Apparently, there was a game called "Human Foosball" set up in the gym which makes me incredibly curious, but I never did investigate it. I got involved with a much more sedate game of bingo indoors in the church basement and saw brother Tim win two prizes, a bag of Red Hots candy and a teriyaki pork jerky snack. I felt glad about that though, because at the last picnic in July, I won a box of Hot Tamales candy which made Tim mildly jealous as those are his favorite. Red Hots are almost equivalent. Dad also won one round and picked out a can of Pringles from the prize basket.

Some of our lunch table buddies, Linda and John, ran a "photo booth" and took photos of congregants in one of the Sunday school rooms that had a lighthouse scene mural and against another wall where there hung a beach boardwalk mural. Tim and I posed. (I'll insert those photos when I get them.)

The whole event was closed up with some singing and a short devotional by the pastor. All in all, it was a very good day.

Also, I was so very excited about puppets and so energized after the show that I bought a new character ... Katie. I figured I needed a kid character "with legs." 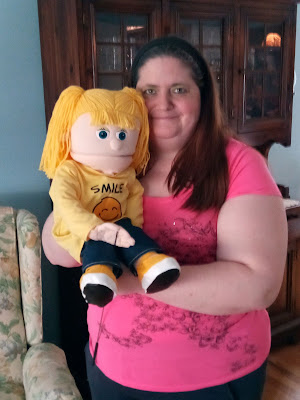